I’m Graham Miller living in Perth, Scotland.  I’ve been taking photographs since a child.  My first recollection was being given a working ‘toy’ twin lens reflex by an Uncle at the age of six. From there I moved to 35mm film and while at University worked with my cherished Olympus OM1 which I still have. I have been an admirer of Don McCullin (who I met last year) for over thirty years and at twenty one fully intended to take a flight to cover the first war that came along.  I met my wife, fell in love and here I am 49 with a successful commercial career, wonderful and supportive family ready to start on an exciting chapter in my life.Photography is one of the supporting pillars of my life and I cannot live without it.  Over the last three years I have been engaged in personal projects.  I became frustrated at the proliferation of the single image as a result of simplified digital picture taking.  It struck me that it order to rise above all that noise I had to engage with subjects and gain access to situations where a snapshot was either not possible or very difficult to achieve.

In coming to photojournalism at this stage in my life I believe maturity and my business skills confer advantages.  The photograph represents a distillation of all my characteristics and abilities.  I lacked confidence and so when my first project ‘The Most Important people in the World:Honesty’ was so well received it gave me the encouragement to take this very important step.  The images were presented during 2010 poster sized and printed on Aluminium in Scotland in two solo exhibitions and included in a double page colour feature in one of the two scottish broadsheets ‘The Scotsman’.  The second exhibition was by invitation from the Scottish Mental Health Arts and Film festival and was opened by Robin Bailey of the National Portrait Gallery.
I’m now working on Downs Syndrome and the relationship between parents and children.

I’m proud to be part of the community and hope over the next two years learn all the skills required to practice as a full time photojournalist. I’m hoping to work with Downs Syndrome as part of the MA course and have a goal to present some of the work at World Downs Congress in South Africa 2012.

I’ve started a website and you’d be welcome to take a look. 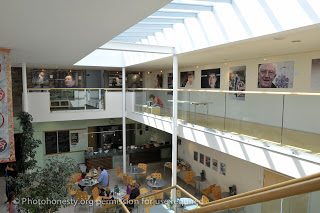